To the French, Verdot is a late ripening red wine grape used in the classic Bordeaux wine blends.  To Scott Hewitt, local trainer and driver of standardbred horses, Verdot is a Village Jasper pacing mare who at the ripe old age of 6 years is racing in the best form of her career.

The mare recently scored her first metropolitan win at Tabcorp Park, Menangle and then last Saturday night was a fast finishing third in the Group 3 Norms Daughter Stakes behind star mare Arms Of An Angel. 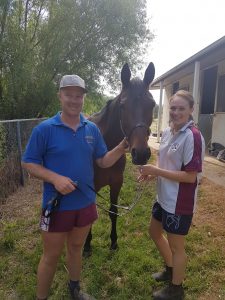 “She’s been racing really well of late and has given us a good kick along” said Hewitt as he and partner Bryanna Swift, who own the mare, posed with their stable star.

With a good twenty five percent win record, the mare has been no stranger to the winner’s circle recording 12 wins from her 48 life time starts.

Following some solid country performances during September and October, the young trainer ventured to Menangle on the 12th of this month where the pair proved far too strong in a $21,200 city mares’ race.

As his twin brother Sam Hewitt experienced during this past winter with the stylish mare Modern Dancer, Verdot provided Scott with his first metropolitan training success and continues the tremendous winning run of the Goulburn based Hewitt family.

Given a cosy run three back along the peg line, Hewitt pushed his way out as they approached the home straight.  Moving to the centre of track, Verdot unleashed a strong sprint which saw her go the line with something in hand when beating the race leader Changeover A Flyin, and the well performed Always Amy in a career best time of 1:53.8.

With the mare performing so well, Hewitt didn’t hestitate to step her up in class again when she contested the Group 3 $31,800 Norms Daughter Stakes last Saturday night, a field which included the Shane Tritton trained Arms Of An Angel; last season’s third place getter in the Group 1Chariots Of Fire and Miracle Mile.

With Arms Of An Angel setting a break neck speed, Hewitt settled Verdot in the back half of the field and was the first to start a 3 wide move as they went past the 500 metre mark of the race.

Entering the long Menangle home straight, the mare moved to the centre of the track and ran on resolutely to grab the third place spot a mere 8.8 metres arrear of the group 1 performer who stopped the clock at a blistering time of 1:50.7 for the mile distance.

“She went through a patch where she stopped improving, but since I stepped her up in class she is racing so much better” said Hewitt who trains a team of six pacers from the on-course Zantis Stables complex at the Goulburn Recreation Area.

Sharing the facilities with his twin brother Sam, and other young trainers Ben Battle and Ian Grimes, Scott’s longer term plans will see him setting up his racing team at Karamia, the former home of his grandparents Tom and Angela Hewitt at Lost River via Crookwell.

“It works out really well when you can train the horses on a track as good as Goulburn, but I’m trying to make a go of it back home where we have other horses spelling and pre-training” said Hewitt who is now in the process of constructing a training track at the Crookwell property.

With a racing team of six, Scott balances his training and driving duties with a successful farriering career and is looking to growing his stable as the facilities are developed further at Karamia.

Racing at the Goulburn Paceway returns this coming Sunday afternoon, the 27th November, 2016, and following a number of local horses who have trialed recently, the club is hopeful of attracting a strong and competitive programme of racing.