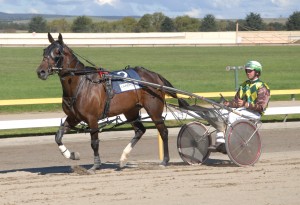 The Goulburn Harness Racing Club is set to kick off its racing season with some hot summer action when it hosts its first meeting next Monday afternoon.  The pre-Christmas date has been a regular event over the last few years proving very popular with punters and fans of the sport that are looking for a moment to relax from the Christmas rush.

In fact, fans of the sport can look forward to regular Monday afternoon racing throughout January as the club will also host race meetings on the 5th and 19th January before its main meeting of the year, the Carnival of Cups race day on Australia Day.

With so much racing on offer, it’s timely that Goulburn’s leading stables have struck a purple patch of form.  The Hewitt family has enjoyed considerable success of late in both country and metropolitan venues.  Brad Hewitt scored his first training double at Menangle on Saturday evening when Im Jay Tee scored an all-the-way win in the $12,000 SEW Staff Christmas Pace.

The second of Brad’s double came through the determined effort of Sweet Molly O’Shea in the $12,000 Christmas Gift heat.  Leading from shortly after the start, the 4yo Mach Three mare fought on strongly to hold out Im El Diablo in the fast time of 1:53.3 for the mile distance.

“The double was good, I thought both would go well and that’s how it turned out” stated Hewitt.  The pair will return to Menangle Saturday night where Sweet Molly O’Shea will contest the $30,000 Christmas Gift Final while Im Jay Tee will be aimed at a similar race to that he won.

The entire commenced the season as a maiden 4yo and has now recorded 2 wins and a second place from his 3 starts this season.  The win took Amy to a total of 10 for the season and sees her positioned just outside the top 20 trainers in the State.  “It’s been a good start; I’m happy” stated Amy.

Monday’s race meeting will be a piper opener to a great a great season, which, in addition to the Carnival of Cups race day will also include heats of the World Driving Championship on Monday the 23rd of February.  Held in conjunction with the World Trotting Conference during the Inter Dominion carnival, the heats at Goulburn will see the world’s leading drivers compete.

Following this, the club will host a second feature race day on Sunday the 8th of March when the $12,500 Tom Hewitt Memorial will be decided.  Also on that program will be the $12,500 Tab.Com.Au Sapling Stakes and the $12,500 Walla Walla Stakes

Racing fans are reminded that gates for Monday’s program will open at 12.30pm and that they can now enjoy the quality food of the new Tucker Box menu.  Patrons will also have access to a wide range of cold alcoholic and soft drinks and the wonderful facilities of the Grace Millsom Function Centre.