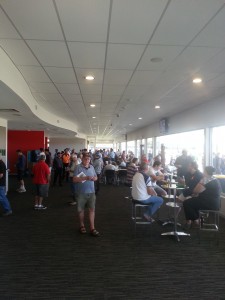 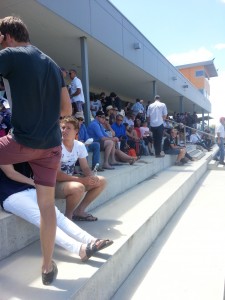 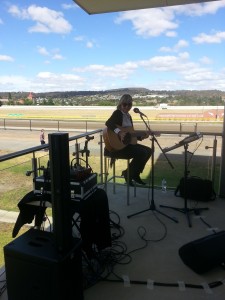 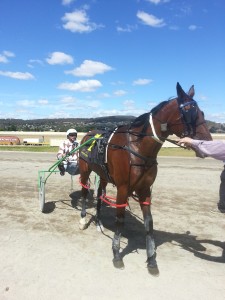 The Crookwell Community Trust fundraiser meeting held at the Goulburn Paceway during yesterday’s Boxing Day public holiday has been declared a resounding success on many fronts.  Whilst a final tally of the money raised is yet to be determined, committee member and treasurer John Mendl was thrilled at early estimates exceeding $4,000.  “It’s been wonderful: great facility, great racing and entertainment, and whilst we are yet to tally up the proceeds, it looks to be over $4,000” said Mendl.

The Community Trust charity provides immediate financial assistance to people of the Upper Lachlan Shire who are struck by tragedy and financial crisis, and yesterday’s event has provided the organisation with much needed funding.

Local vocalist Kerri O’Keefe worked tirelessly during the afternoon entertaining the sizeable crowd of spectators estimated at about 500, whilst the Canberra Mini Trots club showed their wares with 4 races contested in the earlier part of the day.

On the racing scene the broad spread of results mirrored that of Goulburn’s first meeting for the season.  With 8 races determined, 8 different trainers and groups of connections benefitted.  No one trainer dominated proceedings, a result that is so beneficial for the health of the industry.

Race 1 of the afternoon, the Crookwell IGA Encouragement Stakes was taken out by the odds-on favourite Modern Admirer.  Trained and driven by Amy Day, the win was a welcome relief in what has been an unusually slow start for Goulburn’s sole lady trainer.

Ma Koo Loo Hambo confirmed the merit of his previous start by sitting outside the leader Boobalaga Road before racing away to score a very impressive win in the Crookwell Community Trusts Three Year Old Pace over 1710 metres.  In a fast run affair, the Peter Sykes owned and trained gelding stopped the clock in a 1:56.5 mile rate; a mere .5 of a second off the 3yo track record.

Other winners on the day included Shes In Flight from the Paul Fitzpatrick stable, Miss Nickels for David Hewitt, Milwaukee Volo for the Richard Camilleri stable, Island Under Fire for Young based Josh Powderly, and Ideal Warrior from the David Thorn stables at Menangle who took out the Aub Frost Memorial pace.

In the last race of the day, Smokin Bird from the Belinda and Luke McCarthy stable was sent out as the odds-on favourite.  After dominating pre-race discussions, the favourite settled outside the leader but was under enormous pressure turning into the home straight as the Paul Melham and Jack Trainor driven Black Poles swept to the lead.  The raced away to score with ease in a 1:59.8 mile rate win.  A wall of 4 horses crossed the line together for minor place positions with Smokin Bird holding on for second and the Pat Bourke trained Hard To Hear finishing third.

The Goulburn Harness Racing Club and the Crookwell Community Trust extend their gratitude to all who attended on the day and to the sponsors that helped make the day such a success, they being:

The unplaced trainers’ draw continued at this meeting with the 3 recipients being Daniel Rowell of Crookwell, John Morrison, and Jamie Rivett.  Each will receive a Glen Mia ACT Saddlery Gift Voucher valued at $150 which is redeemable through Ian Rixon’s on-course gear van at Goulburn.

The Goulburn Club’s attention now turns to its main race meeting of the season, the Goulburn Carnival of Cups race day which will be conducted on Australia Day, Tuesday the 26th January, 2016.  Featuring the $30,000 Group 3 Goulburn Soldiers Club Frank & Edna Day Goulburn Cup and the $18,000 Goulburn Rose Pace for C2 to C4 pacers, the afternoon of racing is shaping up as an outside day out for the whole family.  Through the efforts of the Business Studies class at Goulburn High School, the club and students have organised activities catering for all tastes, and we look forward to seeing you all on the day.