The Group 1 Victoria Derby Final will be staged at Tabcorp Park Melton on Saturday night with the $200,000 feature drawing together a stellar field of three year olds. 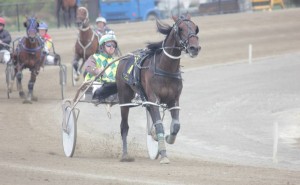 The Brad Hewitt trained Spare Me Days qualified for the final when a fast finishing third in the strongest of the three heats conducted last weekend.  He now takes his place in what is arguably one of the best derby fields of recent years with this year’s field also including the champion New Zealand colts Follow The Stars and Art Union, and the rising Australian star Menin Gate.

In last Saturday’s heat, the Hewitt pacer had to come up against Art Union and Follow The Stars who went on to fight out the finish.  Spare Me Days was driven by Victorian driver Nathan Jack and after being held up momentarily as the field approached the home straight, the IfIhadyourluck gelding responded strongly in the closing stages to run home strongly into third place, a mere 8 metres behind the star New Zealand three year olds.

In Saturday night’s race, Spare Me Days has drawn barrier 1, however in this line up the coveted 1 barrier could prove problematic.  “I’m not sure about the barrier; Justbritell gets out very quick and he’ll hand up to Menin Gate putting me 3 back on the fence” said Hewitt who is contemplating what the best approach will be for Spare Me Days.

With the prospect of being crossed at the start firmly in Brad’s mind, the more favoured approach may be to push as hard as possible to hold out Justbritell before handing up to Menin Gate.  “He (Spare Me Days) can come out very quick, the best result would be to get the spot behind Menin Gate for sure” said Hewitt.

Goulburn Harness Racing club will next race on Monday the 23rd February when the afternoon of racing will feature heats of the World Driving Championships.  A component of the World Trotting Conference which is held every second year, the driving championships will feature the world’s best drivers and is an event no harness racing fan should miss.

Harness fans are also reminded of the Tom Hewitt Memorial race day which this season is being held on Sunday the 8th of March.  Carrying $12,500 in prize money, the annual feature will form part of a great day of racing which will also see the Goulburn Sapling Stakes and the Walla Walla Stakes decided.