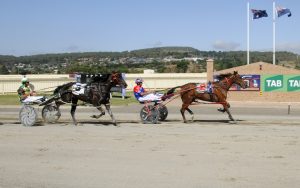 The 2017 Hewitt Memorial race day at the Goulburn Paceway was on all accounts a huge success.  A great program of racing, combined with a very worthy charitable cause, saw a big crowd of spectators pack out the Grace Millsom Function Centre last Sunday.

On the track, the Nathan Turnbull trained and driven Sams The Master went out as the odds on favourite in the $12,720 Hewitt Memorial and didn’t disappoint his many followers.  At the start Turnbull chose not to rush the 4 year old out allowing the Brad Hewitt trained Supriya to take up the early lead.

After travelling no more than 200 metres, Turnbull ambled Sams The Master up to the leader taking over the running as the field entered the back straight on the first occasion.  With Supriya holding the favourite’s back Turnbull upped the pressure as the race unfolded setting sub 29 second quarters for the last 1200 metres.

Turning for home Sams The Master kicked clear of Supriya before going on to win by a length in a fast 1:57.6 mile rate.

Second across the line was Supriya with Sports Chaton working home well to take third place a further 7 metres in arrears.

Owned by Harness Racing NSW Board Member Rod Smith, Sams The Master is now headed to the $200,000 Group 1 Chariots of Fire via next Saturday’s Hondo Grattan Stakes at Tabcorp Park Menangle.

“I was tickled pink with his effort, he’s a live wire and being new to the track he was looking around and he was a bit of handful in the run” said trainer driver Nathan Turnbull.

With the Hewitt Memorial being his third run since a spell, Turnbull believes the 4 year is close to his peak and looking forward to his future races.

“If he doesn’t get into the Chariots, we have at least qualified for the Canberra Cup.  It carries good prizemoney and is a great consolation” said Turnbull. 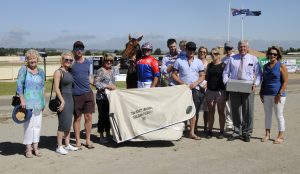 Members of the Hewitt family were on hand to present the winning connections with their trophy and rug.

The afternoon also saw the running of the Aub Frost Memorial which was taken out by the Luke McCarthy driven Comet Stride.  One of many horses owned by Emilio and Mary Rosati, Comet Stride was quickly away from the outside gate to lead throughout in an impressive 1:55.9 mile rate.

With Brian Frost speaking on behalf of the family, driver McCarthy was presented with a commemorative rug as the presentation reminisced of the contribution made to the light harness sport by Aubrey Frost.

With the afternoon featuring many classy horses, it was left to the David Hewitt trained Stanley Ross Robyn to provide the family with a well-deserved win.

Contesting the $12,720 Walla Walla Stakes, the 4 year old was driven by Scott Hewitt who used the sprint lane to grab the win over the Paul Fitzpatrick trained Lets Strike The Gold and the Group 1 winner Kept Under Wraps.

Owned by Peter Mellington, and his son Greg, the former Crookwell Dalgety Stock and Station delegate has enjoyed a good run with 4 year who now is also targeting the Chariots of Fire via the Hondo Grattan Stakes this coming Saturday night.

With the Hewitt Memorial day the first of four Summer Carnival of harness racing meetings being conducted between Goulburn and Canberra, the action now turns to Canberra this coming Sunday (22nd January) when the $15,000 Canberra Derby, the $15,000 Canberra Oaks, and a number of qualifying races are conducted.

The Goulburn club will then race on Sunday the 29th January when it hosts the Goulburn Carnival of Cups meeting featuring the $30,000 Frank &  Edna Day Goulburn Cup.  With a host of other feature races to be decided, entertainment for all the family, harness fans are encouraged to not miss out on Goulburn harness racing’s biggest day of the year.