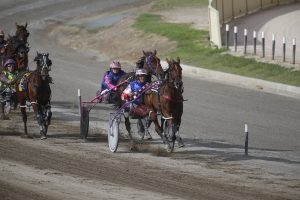 Group 1 winning mare Royal Story provided leading trainer Bernie Hewitt with his first winner of Sunday’s Tom and Angela Hewitt Memorial.  Held in honour of Bernie’s parents, the win was long overdue for the George’s Plains trainer who with his wife Cath and family trains a big team of harness horses.

The 4 year old Always A Virgin mare, owned by Ms. Margaret Meredith, drew ideally in gate 2 and after a slightly tardy start mustered speed to take over the running with 1800 metres to race.

From there on Royal Story dictated terms, and while the Goulburn trained Our Triple Play loomed up at the 1200 metre mark, the mare always had his measure as they race down the back straight on the last occasion.  Turning for home, Royal Story found plenty and fought on too strongly for Colin Mattgregor who raced along the sprint lane to take second place.  Our Wall Street Wolf finished on strongly taking third place from Our Triple Play who peaked on his run and faded slightly to finish fourth.

Royal Story scored by an official margin of 4.7 metres and recorded a good mile rate of 1:58.0 for the 2240 metres distance of the race. 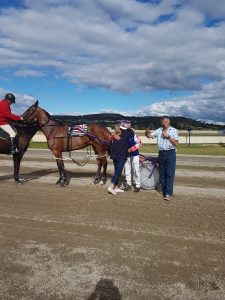 At the post-race presentation, an emotional Cath Hewitt on her way to embrace her husband said “It’s wonderful, I’m so happy for him”

On Royal Story’s win, Bernie said, “It is a great honour and I was confident that [Royal Story] had the ability to pull off the win”.

“Mum and Dad would have been so happy to watch her. She was the best fit for the race from our stable”

Contested in front of a large crowd of spectators, the Royal Story win was very popular with punters who backed her heavily from the $2.80 mark to start a dominant $2.20 favourite.

Hewitt was unsure where to target the mare for her next start, but likely races included the $25,500 Golden Guitar at Tamworth on the 25th January, or the $19,080 Goulburn Rose Pace during Goulburn’s Carnival of Cups meeting on Sunday the 28th January.

Named in honour of Aubrey Frost, another of Crookwell’s great trainers, the Western Terror gelding started a solid $2.70 favourite and went to the front after travelling 400 metres, a position he held until the home straight when he was momentarily challenged by the second favourite Captain Cosmonaut.

Following a short and spirited battle, Bella Ball Terror rallied strongly going on to win by 2.6 metres from the Captain in process recording a fast 1:56.3 mile rate.  Third across the line was the Dennis Day trained Harry Day who finished on strongly along the sprint lane.

Owned by Dennis’ parents Grant and Jenna, the three year old is being aimed at the Group 1 $200,000 NSW Derby in February, and is likely to have his next start at Goulburn on Carnival of Cups race day.

“Mum and dad own him, and dad has mapped out a bit of a program which takes in the Evolution Series heat at Goulburn.  We’ll see how he is going but we’re aiming for the NSW Derby” said Dennis post-race.

In the Walla Walla Stakes, harness fans were given a glimpse of the talented New Zealander Franco Nelson.  A multiple feature race and Group 1 winning horse, the imposing stallion who has already amassed stake money of over $750,000 treated his opposition with contempt as he surged clear to record a resounding win.

Driven by Lauren Tritton, Franco Nelson broke up the field with two blistering mid race sectionals of 27.7 and 27.8, and while he slowed noticeably in the final quarter, Franco Nelson held off the Brad Hewitt trained and driven Spare Me Days, with Uncle Jay for Laggan trainer Steven Lee grabbing a distant third place finish.

In a day of strong head winds, Franco Nelson recorded a fast 1:55.6 mile rate and is now poised to take on the Goulburn Soldiers Club Frank & Edna Day Goulburn Cup.  “We’ll be back for the Goulburn Cup; I was really happy with that” said Tritton post-race.

On an afternoon honouring greats of the sport, the Crookwell community turned out in great numbers helping Crookwell Community Trust members raise important funds for their operations.

Trust chairman Tim McCarthy was once again thrilled with the outcome, “That was a good day; it was great!” said Tim.  “Like last year, the afternoon was a great social event, and Bernie winning the last made it all the better”

With so many people from the Crookwell community coming out for the afternoon, the Grace Millsom Centre was once again packed with established harness racing fans and first time attendees alike.

With the major raffle helping raise funds of $3,500, the harness club and the Community Trust are already looking forward to next year’s event.  “It’s a great afternoon; the racing was first class and the fund raising cause so important that we are enthusiastically looking to next year already” said harness club secretary Mark Croatto.

The Goulburn club will next race on Sunday afternoon the 28th January, when the very popular Carnival of Cups race day will be held.