Breeders Crown final day is the pinnacle of the Australian harness racing calendar bringing together the very best young pacers and trotters in Australasia.

Held annually in Victoria at Tabcorp Park Melton on the last Sunday of August, the afternoon of racing consisted of a record ten Group 1 events, including the $213,000 Bettors Delight @ Woodlands 3 year old fillies’ final. 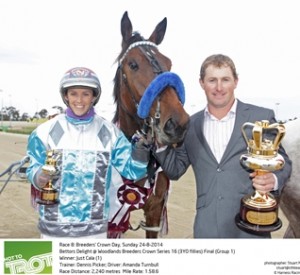 In a day of many highs, it was local trainer Dennis Picker combining with gun up-and-coming reinswoman Amanda Turnbull who tasted Group 1 glory with 3yo filly Just Cala in the 3yo fillies’ classic.  Runner-up was Barynya and third placegetter Quick Draft.

Just Cala, a filly by the indomitable Art Major out of a Kiwi mare named Lilsistar, found the front yesterday from barrier one, showing far more speed off the arm than she had in her previous two starts.

“I thought Spicy Stride would cross me before the race but once I was able to hold her out I was lucky enough to be able to be in front, which worked out really well,” Turnbull said.

Turnbull handed up to the challenge of Nike Franco, who was set alight from the rear of the field early, grabbing the spot behind the Luke McCarthy-driven race favourite.

As the field headed towards the home turn McCarthy was starting to ask Nike Franco for more and Turnbull had to decide whether to wait for the sprint lane or ease across the heels of the leader and death-seat horse Quick Draft to make her run wide.

She took the latter option, which in turn allowed Tasmanian filly Barynya to storm through on the inside after a three-back-the-pegs trail.

“Luke was asking for his filly to show a bit more while Chris (Alford) was sitting quietly on his,” Turnbull said.

“I was travelling really well at that stage so I decided to go to the outside of them.

“She let down like she has the first two times I’d driven her.

While at first glance punters may have thought it was the wrong move by Turnbull, the young gun driver’s decision paid off in spades as Just Cala thundered down the outside to edge out Barynya at the line.

“In the run she was hanging a bit so I was a bit worried about her going into the sprint lane,” Turnbull said of her home-turn decision post-race.

“She was travelling pretty good though, and she really found the line.”

Quick Draft battled on well for third after sitting parked.  Nike Franco, which ran to the front early from a back-line draw for Luke McCarthy, got away with a cheap first half (63.6) but isn’t finishing her races off like we know she’s capable of. She ran fifth behind fourth-placed Tuscan Breeze.

Trained by Dennis Picker of Bigga, the win was the biggest of his career so far.  “You don’t think those sorts of things can happen, it’s definitely the biggest win I’ve ever had anything to do with”

In a wonderful season of racing for the Pickers, Just Cala was the perfect way to cap off an extended interstate campaign which saw Dennis net in excess of 10 winners.

She arrived in Queensland from New Zealand in mid-June where she immediately commenced a hectic schedule, winning 2 races for Dennis in preparation for the winter classics. 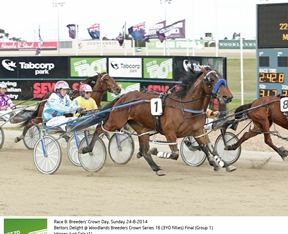 “She raced the best fillies in Queensland holding her own against them” stated Picker.  Following a solid 7th in the Queensland Oaks, Just Cala was narrowly beaten by star filly Nike Franco in a Breeders Crown heat before finishing a most unlucky 4th in the Redcliffe Oaks.

Following a short 6 hour sleep, Just Cala was on the road to Victoria via Gunning before arriving at the stables of Amanda Turnbull at Shepparton.  .  A calm and easy to handle filly, Just Cala has taken it all in her stride.  “She’s an amazing filly, never misses a feed and is just so easy to work with” stated Picker.

Under Turnbull’s watchful eye, Just Cala was an impressive 2nd in a Breeders Crown repechage heat held at Kimore before taking out the $20,000 Semi Final at Ballarat leading the way into Sunday’s Final win.

Just Cala will now enjoy a 2 month break in the Bigga hills before returning to training for her 4 year old season.  The filly was purchased with a breeding career in mind but will add a touch of class to the local harness racing contingent in the meantime.