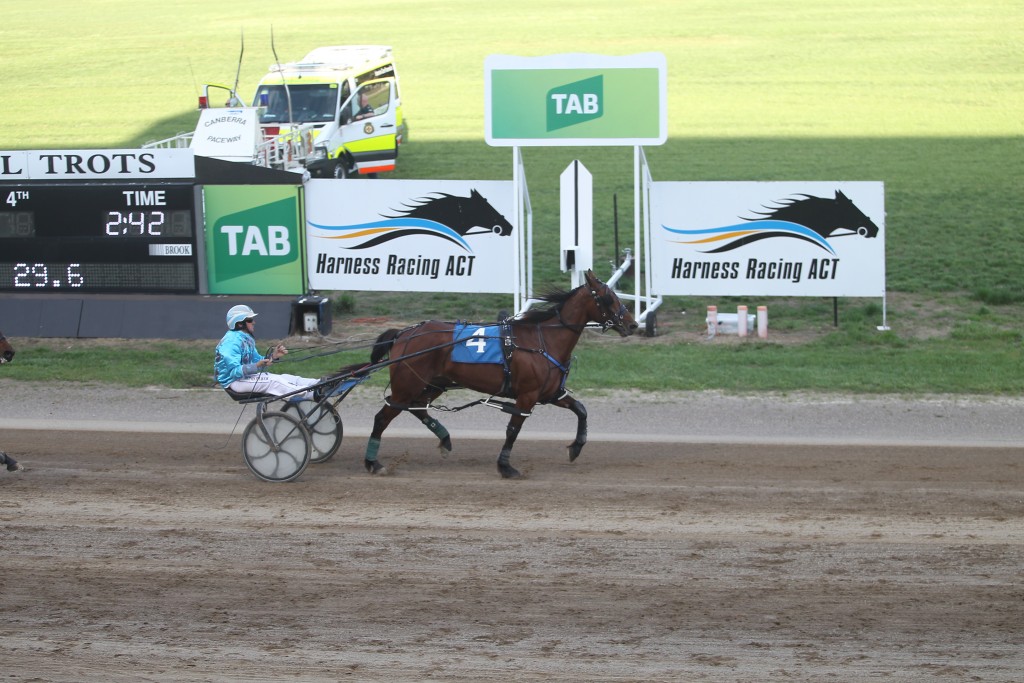 Bigga based trainer Dennis Picker has enjoyed his share of success with nice horses in recent years with the list of fine performers including Intimate Moments, California Sunset, Breeders Crown champion Just Cala, and of course the ever popular Condagen who has bankrolled just short of $200,000 in prize money.

The latest to join this list is the enigmatic Onlykidding, a 5 year old Pacific Fella mare who has put together the impressive race record of 11 wins from 21 Australian starts.  Bought by Picker through a New Zealand blood stock agent, the mare arrived at his stables as a maiden performer with a record of 14 starts for 1 second and 2 third place finishes.

Picker then formed a syndicate including his mother Jenna, young couple Hannah Smith and Tom Hand, Matt and John Nagle.

From the outset the mare displayed ability but was a ‘headache’ horse; she was bad gaited and galloped often for no reason.  At her debut Australian start the mare started an odds-on favourite at Menangle in May of 2014; however she raced roughly, broke in the running and tailed off in an inglorious performance.  Not dismayed, Picker set about sorting out the mare and when she resumed racing in March of 2015 she immediately realized her trainer’s confidence by recording 3 wins on the trot at Canberra and Wagga.

A return to the bad ways then followed with the mare galloping at her next few starts before a couple of wins at Young and Bathurst in early winter convinced the trainer to take her to Queensland.  In total the mare had 8 starts north of the border for 2 wins and a second place; however her errant ways reappeared before advice from a leading trainer paved the way for her return to the winners circle.

“She’s not a well gaited horse, but we got her going using ‘bloomers’ which are an old and much bigger hopple” said Picker.  Following her Queensland trip, the mare resumed racing at Junee in early November with an emphatic win and quickly repeated the effort at Canberra and Bathurst later in that month.

“She’s a C7 now so there’s not much left in the bush” stated Picker, before adding “We’ll aim up on Saturday nights at Menangle.  An M0 win would be good; anything else would be a bonus”.

Picker wasn’t kidding with those comments as Onlykidding then started at Menangle last Saturday night in a $22,000 heat of the Christmas Gift.  Driven by Matt Rue, Onlykidding settled in the middle of the field before letting loose with a big sprint that saw her race away to an easy 4.3 win over the Brad Hewitt trained and driven Spare Me Days.

Her metropolitan debut was made all the more special with the mare recording her fastest win to date when she stopped the clock at 1:52.3.

Saturday night’s win underlined Picker’s start to the season which has been highlighted by a continuous run of wins including doubles and trebles.  Whilst Onlykidding was stamping her promise at Menangle, Picker was at the Canberra meeting where he prepared Geronimo Beau for a first up win.

“It’s been unbelievable really, it’s why you do it” stated Picker when asked about his wonderful strike rate since returning from his Queensland winter campaign.  In all Picker has raced at 6 different meetings winning at each of them, and has totaled 10 wins including two doubles and a treble.

Local trainer Daniel Rowell is sporting a fractured wrist following a fall at Young during late October.  With a team of 8 pacers in work, it’s been quite hectic for the Kialla Road stables who were rewarded for their efforts by the first up win of Boobalaga Road at Canberra on Saturday night.

Owned by John McGeechan, Boobalaga Road started second favourite in the $3,500 Glen Mia Act 3 Year Old Pace.  The promising pacer was driven by Scott Osmond and led throughout to score a strong win the very good mile rate of 1:59.9.

Goulburn Harness Racing Club will host their first meeting of the season next Monday, the 21st December.  The pre-Christmas meeting will have a visit by Santa Claus for all the children.

The club’s second meeting will be on the Boxing Day public holiday, Monday the 28th December and the club encourages all fans to make a special effort to attend.  The day is a major fund raiser for the Crookwell Community Trust and we are asking all who attend to donate $10 which will be collected by Trust members.

“It’s an outstanding charity which does incredible good for Upper Lachlan people who have been struck by tragedy” said club secretary Mark Croatto.  The club is aiming for 1000 paying fans to make the day a real success which will also feature the musical talents of Kerri O’Keefe, mini trotting, and of course some exciting harness racing.

Gates to the Goulburn Paceway will open to the public at 12.30pm.  Get a copy of Monday’s Goulburn Post for all the fields and tips.