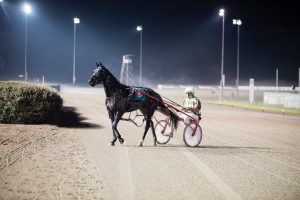 Pacers from the Hewitt family’s Goulburn stables look set to play a significant hand in Sunday’s Alabar NSW Breeders Challenge Finals day at Tabcorp Park Menangle.  With seven Group 1 races to be decided; and prizemoney just short of a million dollars on offer, the afternoon of harness racing is one of the most important on the NSW calendar.

The six NSW Breeders Challenge Finals are the culmination of heats and semifinals that have been conducted throughout NSW during May and June, and caters to the best NSW bred horses in the two, three and four year old categories for each sex.

Leading the way will be Arma The Gun who has been installed as the pre post favourite in the three year old feature.

Trained and driven by Brad Hewitt, Arma The Gun qualified for Sunday’s race by winning his $25,000 semi-final last Saturday night in a solid 1:52.9 mile.  That performance followed a convincing heat win at Menangle the week before.

In Sunday’s final Arma The Gun has drawn barrier, and has been installed as the $1.90 favourite.  On disclosed form he appeals as the horse to beat.

An elated Brad Hewitt commented “The draw has helped him; he’s going to be right in it”.

Bred and owned by Goulburn locals John and Kim Ridley, the black Village Jolt gelding is the fourth foal of Arma The One who the brothers raced before injury cut short her racing career.

Whilst Arma The Gun will be the punters’ clear choice on Sunday, another local in Thats Ideal also qualified for the rich final by finishing fourth in the first of Saturday’s semi-finals.

Starting from the second row, Thats Ideal settled in the back half of the field and worked home strongly to finish a 12 metre fourth behind Sams The Master who recorded the faster of the two semi-finals when stopping the clock at 1:52.5 for the mile.

Trained by talented reinswoman Amy Day, Thats Ideal has been racing in great form and after drawing gate 1 provides his young trainer with her first Group 1 runner.  “We’ll be looking to come out and hold our spot; he has the speed so I’m hoping to sit up behind the leader” said Amy.

The final has drawn together a capacity field of quality young pacers, and a one two finish for Goulburn horses is not out of reach.  “It would be great to quinella the race with Amy” said a hopeful Brad Hewitt.

In the $100,000 Four Year Old Entires & Geldings Final, David and Brad Hewitt will start the two favoured runners Hez A Dude and Spare Me Days.

Trained by David, Hez A Dude was an easy winner of his semi-final recording a 1:52.9 mile.  Driven by Brad, Hez A Dude camped off the pace before Brad steered a path to the middle of the track and racing away to win by a length over the Steve Turnbull trained Mouse In The House.

The Stonebridge Regal entire has drawn gate eight in the final and will be driven by his trainer David Hewitt.  In the earlier semi-final, the Brad Hewitt trained and driven Spare Me Days finished an unlucky third behind Colonel Joy.

Travelling three wide for most of the race journey, Spare Me Days moved up outside the leader at the 600 metre mark before staging a four horse war down the long Menangle straight to be narrowly beaten by Colonel Joy and Egodan. With a preferential barrier draw in place, Spare Me Days being the best performed pacer has drawn gate fourteen on the second row.

The two Hewitt pacers have been in outstanding form this season and quite fittingly will go to the start as the crowd favourites.

The pair are joined by the Steven Lee trained Uncle Jay who has drawn gate 2 after finishing fifth in Colonel Joy’s semi-final.

The Laggan trainer has been enjoying a great run with his small stable this season and will also start Nanas Eyes in the $30,000 Alabar NSW Breeders Challenge Two-Year-Old Trotters Final.

Step daughter Kristin Cunningham, who trains pacers in Crookwell will start the mare Miss Nickels in the $100,000 4 year old mares final.  The former Hewitt trained pacer has been racing consistently and will be aided by her good gate 3 draw.

The Menangle program also sees the Inter Dominion champion Lenny The Shark take on a quality field of pacers in the $100,000 Len Smith Mile.  The Country’s best horse has drawn gate 2 and will go to the start as the short priced favourite.