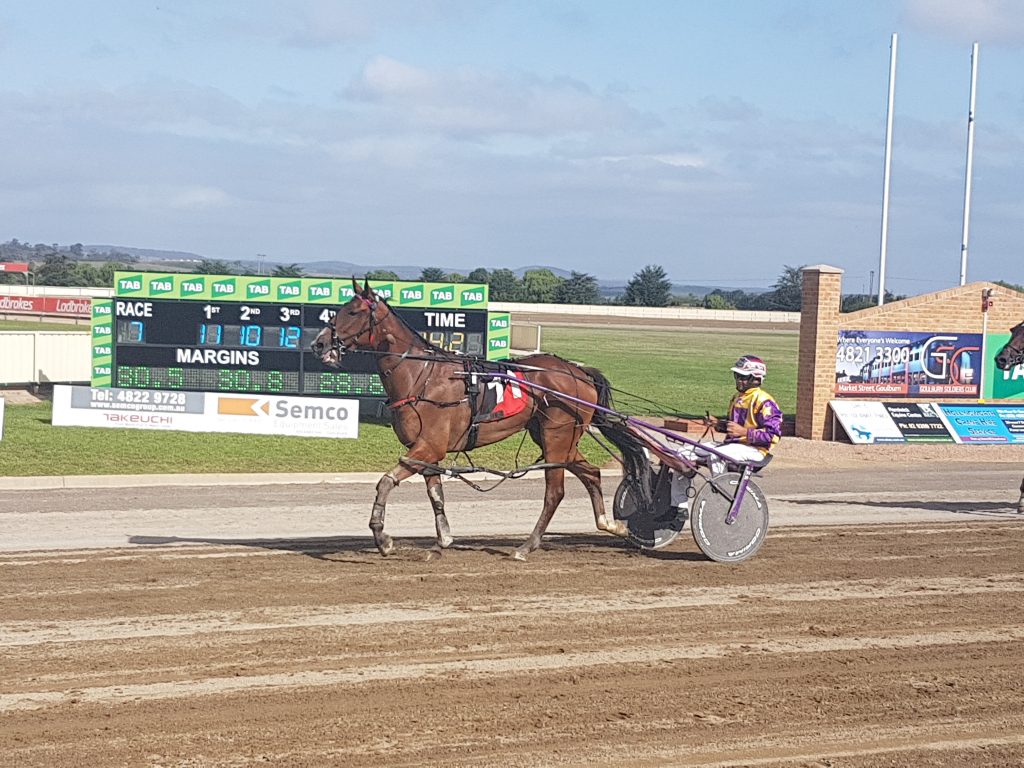 Lets Katchmeifucan following his win in the 2019 Hewitt Memorial

The annual Hewitt Memorial race day will be held at the Goulburn Paceway this Sunday afternoon, January 12th.  Celebrating the memory of Tom and Angela Hewitt, the afternoon also provides the Crookwell community with an opportunity to raise funds for the charitable works of the Crookwell Community Trust.

“The Crookwell Community Trust raises money that is used to provide immediate support to Upper Lachlan residents who may suffer extreme difficulties due to personal and or natural disasters” said club treasurer Mark Croatto.

With the current bush fire emergency ravaging country side throughout eastern Australia, the role of the Crookwell Community Trust is brought to the fore.  “Fortunately the Upper Lachlan has been spared, so far the catastrophe other areas have experienced” said Croatto, “However, with the threat of fire ever present, it is reassuring for local people to know support is available should it be needed” added Croatto.

As in previous years, Trust members will conduct a major raffle with multiple prizes including a $150 dinner voucher at The Argyle Inn, Taralga where patrons can delight in the delicacies of the world class kitchen.

Other prizes include a JD’s Hardware & Rural Supplies gift voucher, a Meats A Treat voucher and a carton of quality wine bottles.

Community Trust members will set up inside the Grace Millsom Function Centre and the harness club encourages all those attending the race meeting to generously purchase tickets in the raffle.

Sunday’s meeting will also celebrate the memory of Aubrey Frost and Robert Allport, two other harness racing trainers both of whom were heavily involved in the harness racing sport in Crookwell.

For the pleasure of those attending, further entertainment will be provided throughout the afternoon by brothers Lachlan and Thomas Bensley who perform as Short Notice.  The brothers debuted at last year’s Hewitt Memorial day and will show their singing talents in between races.

On the racing front, Bathurst based trainer Bernie Hewitt will be aiming the well performed mare Write About Lexy at the $12,720 Tom & Angela Hewitt Memorial.  Hewitt has won the last two editions of the Hewitt Memorial with Royal Story in 2018 and Katchmeifucan last year.

“She’s a nice mare who finished second in the Hanlon Sprint at Parkes last start.  We’ll be nominating her and she should get a run” commented Hewitt.

Goulburn training team of David and Brad Hewitt will be pinning their hopes on Im Bruce Almighty and The Texas Ranger.  Both pacers will be resuming from spells however they established their credentials for Sunday’s race with sound race performances last season.