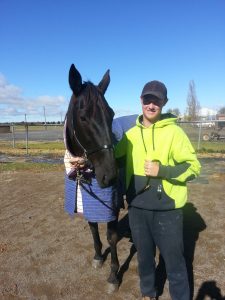 In a close finish, Modern Dancer who charged home between horses grabbed the lead in the shadows of the post before recording a narrow win over Burning Ambition and Always Amy in the listed $26,000 final.

The Modern Art mare had gained her place in the field when finishing a narrow second to Hez A Dude in a heat conducted at Goulburn earlier this month.

In Saturday night’s final, Modern Dancer settled four back along the pegs after drawing gate seven, and in a patient and well timed drive Hewitt was able to ease the mare out across the back of the leading division as they reached 150 metre mark. Once in clear running, the mare closed quickly for a narrow but decisive win, recording a 1:54.4 mile in the process.

Owned in partnership with Rob Allport of Crookwell, Modern Dancer has been a wonderful money spinner for the pair.

“She’s earned nearly $100,000 and is enjoying her best season ever” said Hewitt who has had to nurse the mare in her training and racing following a few hock and leg complications. As the winner of a Breeders Challenge 2 year old heat earlier in her career, Modern Dancer had always shown the potential to be a good race horse.

Part owner Rob Allport bought the mare at the Sydney APG sale for what is now the bargain price of only $5,000. “We liked the look of her; she was a good sized, athletic and she was by Modern Art who at the time was on fire as a stallion” said Allport who took much joy from Saturday night’s win.

Her future racing will now be focused towards the metropolitan mare races at Menangle. “After that win she’s a C6 so we’ll try and pick up a mares’ M0 during the winter when the better ones are up in Queensland” said Hewitt.

In a sport that is often thought of as being relevant to the older generation, Sam is one of three young men who share the on-course stabling at the Goulburn Paceway, the others being Ian Grimes of Goulburn and former Bathurst reinsman Ben Battle. Between them the trio is building a small but competitive team of pacers.

There would be little doubt for Hewitt that Modern Dancer is the stable star; however a few young horses, and established performers such as Audrey Maree and Lucky Art are helping the 2012 NSW Rising Star champion to a successful harness racing career