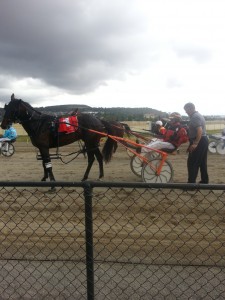 Racing returned to the Goulburn Paceway yesterday afternoon when the club hosted an excellent 8 race program under cloudy but very comfortable conditions; a stark difference to what many had experienced the day before when oppressive heat enveloped much of south east Australia.

The club was heartened by the excellent crowd that made its way to the course, including many children.  With so many people on course it generated a real buzz which was matched by the on-track action.

In an excellent result for the industry as a whole, each of the 8 races was won by different trainers and connections, with the only double of the afternoon coming via David Morris who drove Sylvie Raine to victory for his father Noel Morris of Menangle, before driving Cant Rush Me to his last stride win for Goulburn trainer Phillip Laughton.

The highlight of the day came early when a track record equalling performance was seen in the opening event, the RSM Your Local Business Advisors Three Year Old Pace.

Contested over the 1710 metre distance, the Darren Hancock trained and driven El Major, who is a half-brother to the well performed El Fuego, started a very short odds-on favourite before breaking through for his first career win.  The Art Major colt, which had drawn barrier 1, was untroubled to lead throughout, setting sub 30 second quarters which saw him scoring easily from Stitched Up and Ma Koo Loo Hambo.

The overall time was 2:03.3 equalling Group 1 performer Grand Stride’s 3yo track record.  The mile rate was an impressive 1:56.0.

At this meeting, the Goulburn club introduced a new initiative by conducting an unplaced trainers’ draw.  Any trainer who had not finish in the first 3 place positions during the afternoon was included and by the hand of Chief Steward Todd Sharwood three names were drawn, they being David Waite, John Jeffcoate and Howard James.  Each will receive a Glen Mia ACT Saddlery Gift Voucher valued at $150 which is redeemable through Ian Rixon’s on-course gear van at Goulburn.

The Goulburn Club will next race on Monday the 28th December, 2015.  The afternoon program will also be a fund raiser for the Crookwell Community Trust, a local charity which helps individuals and families of the Upper Lachlan Shire who have been struck by tragedy.  A $10 donation is ask of all attending the day and to help make the meeting a success, the Goulburn Club has increased prize money on four races to $6,000.

The club has also organised additional entertainment with local singer Kerri O’Keefe performing, mini trotting and a number of great raffles.  We encourage all to come out and share in a wonderful community event.