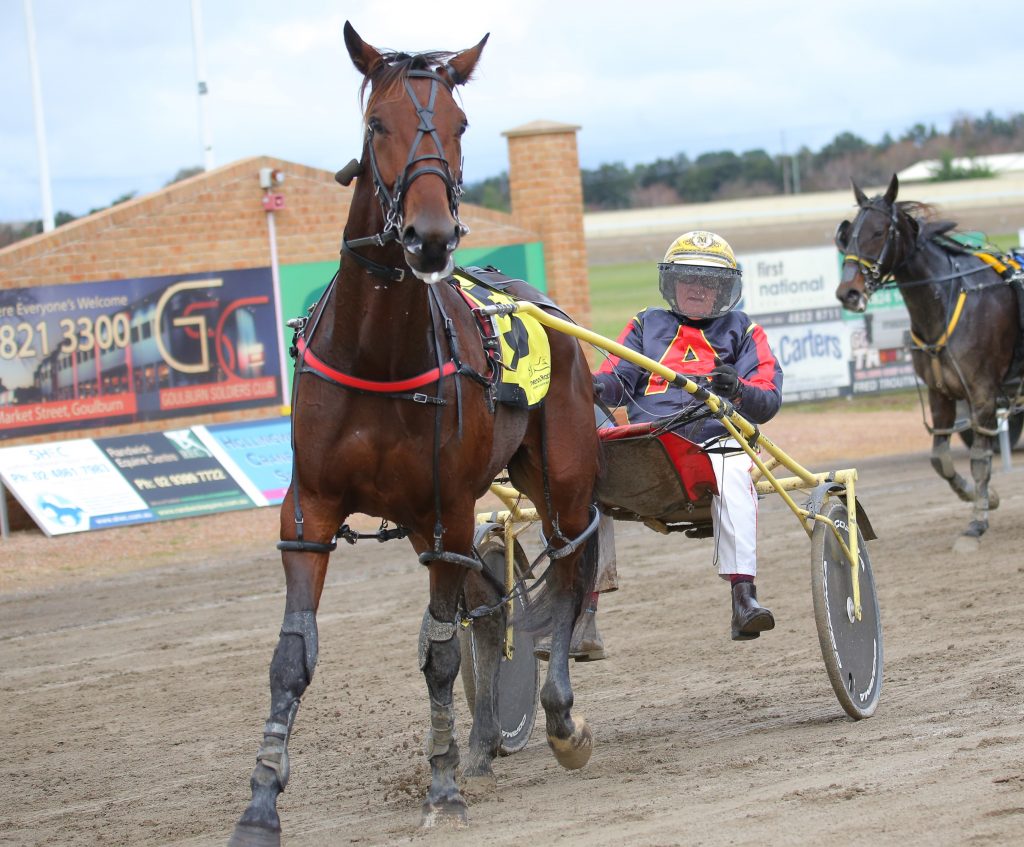 McDowell partnered with Pikarso, a 4-year-old Artistic Fella gelding who traces back to the family’s champion mare The Private Dancer, to take out the $5,999 Crust Gourmet Pizza Goulburn Pace.

Starting from gate 5, Pikarso was caught three wide early in the race before settling in the breeze as the pair entered the home straight on the first occasion.

From there on, McDowell and Pikarso pressured the leader Blazin Heaven and as they raced along the back straight surged clear going past the 600-metre point.

In the run to the finish line, Pikarso fought on too strongly winning comfortably from The Maharani and Shoobees Charm in a solid 1:57.8 mile rate.

Pikarso’s win was the first of Colin’s treble, the other two coming the way of Major Obahma and Ananais.

“He went quite good; he was caught in the breeze which is never good for any horse, and he won well” said Colin.

With a career spanning nearly 4 decades, Friday’s win was another career highlight for McDowell who has experienced success in many facets of the industry.

“We bred Pikarso; we also bred his mother and his grandmother, and he’s a half brother to Home Of The Brave who won the Group 1 Breeders Challenge Final for 3 year old’s” added Colin.

While acknowledging the merit of 500 driving wins, McDowell was more excited at driving three winners on the program, and the stable winning four of the eight races on offer.

“I thought the 500 wins came up last week because some of my earlier wins were not officially counted, but the treble, that was fantastic; it was a great thrill” explain Colin.

“What a great day for our stable, the most wins on one day” Colin added.

Having attended the Goulburn track with a team of 10 horses, the Mulgoa based training partnership of Kerry and Dean McDowell were confident of a good showing.

The first of the winners came courtesy of the Lleyton Green driven All Star Magician who contested the Nutrien AG Solutions Goulburn Pace.

“He missed a bit of work as he is the travelling partner of Michelle Lee Mac so he surprised us a little with his win” Dean McDowell explained.

On managing to win half the program of races, Kerry McDowell commented “We were not confident, no, definitely not that many, but Dean is always more positive”.

With Colin McDowell steering Pikarso to the stable’s second win of the afternoon, the third winner came up through Major Obahma winning race 7, the TAB Long May We Play Pace.

“We were confident with Major Obahma.  He won his previous two and his last win at Goulburn was impressive” Dean said.

The stable’s fourth win came in the last of the day, the Goulburn Soldiers Club Pace.  Ananais, a 4-year-old Bettors Delight gelding was simply too strong for the opposition going on to win by 2.8 meres in a good 1:57.2 mile rate.

“Ananais was knocked over at Goulburn last start, but had won at Newcastle before that and earlier had won three on end at Menangle, so yes we were confident of his chances” explained Dean.

Friday’s successes capped off an outstanding week of racing for the stable who also won the Group 1 $210,000 Australian Pacing Gold 4-Year-Old Mares Final with Michelle Lee Mac at Melton the Saturday night prior.