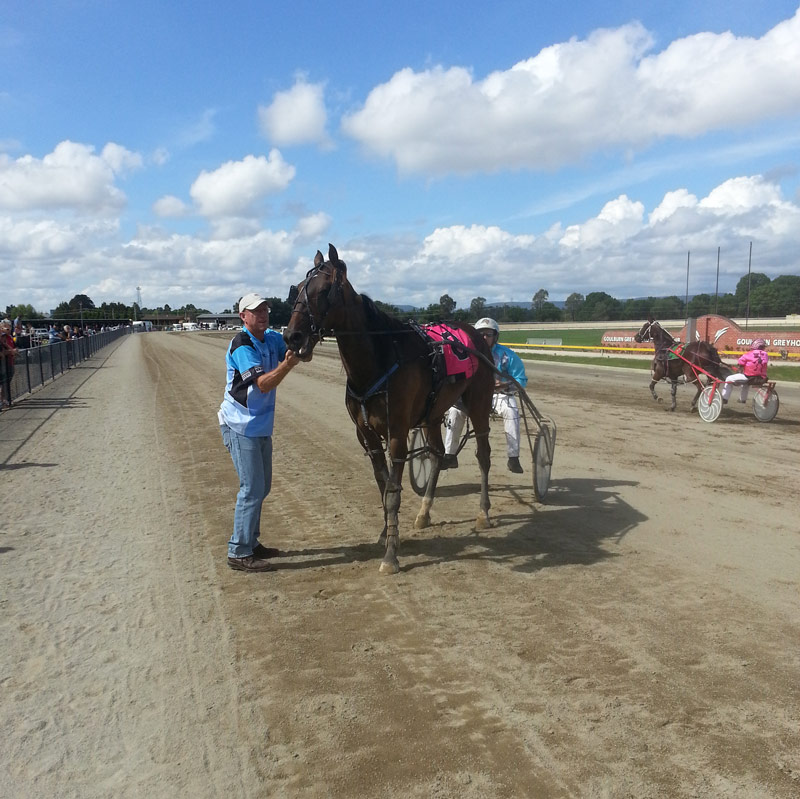 The Dennis Picker trained and driven Condagen proved far too strong when he came with a withering sprint to swamp his rivals in Tuesday’s $30,000 Frank & Edna Day Goulburn Cup.

In front of a terrific Australia Day crowd, the Group 3 feature which is sponsored by the Goulburn Soldiers Club was a highlight in the young trainer’s career and a welcome return to form the for the 7 year old pacer.  Owner Pat Bourke of Taralga was a noticeable absentee following a fall which saw him hospitalised in the week leading up to the Cup, but the win would be a great tonic.

With this year’s cup one of the most even in years, Condagen’s task was made all the more difficult after he drew the outside of the front row in the capacity field of twelve.

“With his draw I had no choice but to go back at the start” said Picker, who grabbed hold of Condagen and manoeuvred him to the rear as the 2016 field were released at the 2240 metre start.

First to break the line was the Lauren Panella driven Yayas Hot Spot who charged to the front with Goulburn’s other hope Spare Me Days for Brad Hewitt pushing up the inside of that horse.  The pair race towards the back with Yayas Hot Spot eventually gaining the lead however that was short lived as James Rattray and Pachacuti strode up strongly to take over down the back straight.

The lead time was posted in a sizzling 44.2 seconds; the equal second fastest recorded at the track.

With the field running along Picker bided his time in last spot, “I got to the back and it all went so good; they ran along in front and he travelled so well” explained Picker who started a move passing the 400 metre point of the race.

Up front the Hewitt runner, who had settled three back along the pegs, moved off the fence into a striking position.  Back in the field Condagen was moving stylishly as Picker steered him to the outside as the pair approached the top of the home straight.

On entering the home straight young Brad Hewitt hit the front with Spare Me Days looking the likely winner but it was short lived as Condagen unleashed a blistering sprint to race past them at the 100 metre point and go on to win with ease in the end.  In a game performance, third across the line was Yayas Hot Spot with Pachacuti holding on for fourth.

“He sprinted so well, it was great” said Picker who was all smiles following their success.

For Condagen the win was his 19th and elevated his stakes earnings well past the $200,000 mark.

The win capped an outstanding day of racing and entertainment for the Goulburn Club who had worked closely with the business study students of Goulburn High School.  Harness fans were treated to musical performances, street theatre, strolling magic shows and the inaugural “Challenge of the Codes” which was taken out by the Goulburn Swans AFL team of Dale Cummins and Brody Willis.

Other racing highlights during the afternoon include the crushing win of Cyclone Kate in the Goulburn Soldiers Club Goulburn Rose, the 1:54.9 win by Charlaval who smashed the 3 year old track record in the Maddens Stable Bedding 3 year old pace, and the win by star filly Merrywood Ruby in the RSM Your Local Tax Accountants 3 year old fillies pace.

The Goulburn club extends its appreciation to all who came and supported its premier meeting of the season.  The club next races this coming Monday afternoon (1st February) when it hosts the final qualifying heat of the $25,000 Canberra Cup which will be decided on Sunday the 7th February.