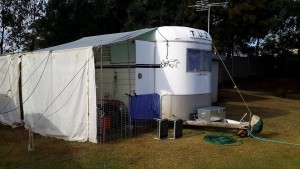 With 22 New South Wales tracks crossed of his ‘bucket list’, harness trainer Len Clement, and wife Christine area ready to cross off number 23 when they compete at the Goulburn Paceway on Monday afternoon.

“Len’s had this bucket list to race on all tracks in NSW, and Goulburn is our next stop” said Christine when organising their stay at Goulburn

The couple has been on their journey to race at every track in New South Wales since September and are accompanied by their 8 year old race mare Lifeslittlesecret, the cat and their dog.  Having set up home in a renovated 3 horse float, the couple plan to complete the first leg of their journey in February at which time they will return home to Bendemeer, a small rural town north of Tamworth.

Clement last raced at Bankstown on the 22nd when the track experienced heavy rain for much of the night.  They then made their way south to Goulburn spending their Christmas on-course at the paceway.

Len and LIfeslittlesecret are engaged in race 1 of the afternoon, the $6,360 Crookwell IGA Encouragement Stakes over the 1710 metre distance.  Drawn in barrier 6 the mare will face stiff opposition from the locally trained Modern Admirer.

The Goulburn Harness Racing Club wishes the Clements the best of luck for tomorrow’s engagement and the remainder of their bucket list adventure.