The $31,800 race has brought together a quality field of pacers including Grand Circuit horses Franco Nelson, Yayas Hot Spot and Tiger Tara.

Sponsored by the Goulburn Soldiers Club, the field of 10 has amassed just under $4 million dollars in stakes earnings.

Tiger Tara from the Sydney stables of Kevin Pizzuto leads the way with $1.2M of stakes money and the Inter Dominion contender is looking to make amends for an uncharacteristic last start performance when down the track at Menangle.

Previous to that start, the 7 year old Bettors Delight horse had finished third in the final of the $1.1 million Inter Dominion at Gloucester Park, Perth.  His form in the series included a heat win over the star pacer Lazarus who went on to win the final.

The Menangle based training team of Shane and Lauren Tritton will be represented by Walla Walla Stakes winner Franco Nelson and last season’s Cup winner Yayas Hot Spot.  With both horses hitting top form trainer Shane Tritton is hopeful of a strong showing on Sunday.

“Very happy with both horses; Franco Nelson is a class horse right at the top and we know Yayas Hot Spot can do it having won last year” said Tritton.

Franco Nelson’s Walla Walla Stakes victory was full of merit with the pacer putting together blistering mid race sectionals of 27.7 and 27.8 before racing away to an easy 13.6 metre win.  On an afternoon of strong head winds the final quarter came in at 31 seconds but the mile rate was a brilliant 1:55.6 for the 2240 metre distance. 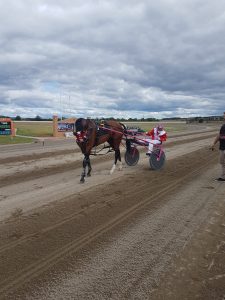 Tritton believes Franco Nelson will be much improved following his Walla Walla Stakes win a fortnight ago.  “I expect he will be improved on his last run; he’s switching on and will be very hard to beat” said Tritton.

With all three pacers still in the nominations for next week’s $500,000 A G Hunter Cup to be held at Tabcorp Park Melton, this season’s Goulburn Cup looks the strongest in a number of years.

The hopes of a home town win rest with Brad Hewitt and the ever consistent Spare Me Days.  A last start second to Franco Nelson in the Walla Walla Stakes, the 6 year old IfIhadyourluck horse has drawn well in gate 2.

“He’s up against it on Sunday against those horses” said Hewitt who is hoping to get a cozy run behind the likely leader Franco Nelson.

The Frank and Edna Day Goulburn Cup is scheduled as race 7 on a big card of racing which also includes the much sought after Goulburn Mulwaree Council Goulburn Rose.

A capacity field of 12 up and coming pacers has been amassed for the $19,080 feature, including last fortnight’s Tom & Angela Hewitt Memorial winner Royal Story.

The 4 year old Group 1 winning mare has drawn reasonably well in barrier 4 should the emergency runner Megs Monaro not get the run.  The Bernie Hewitt trained mare has improved with each run this season, however comes up against Maitland’s Inter City Pace Final minor place getter Delightful Memphis who drawn perfectly in gate 1.

Contesting an M0 mare’s race, Delightful Memphis did all the bullocking work being posted 3 wide before finding the spot outside the leader when beaten a half head in a 1:52.9 mile.

Over the more suitable 2240 metre journey, and from the ideal number 1 barrier, Delightful Memphis looks very well placed to turn the tables on Royal Story.

With the Carnival of Cups race day being the Goulburn Club’s most important race meeting of the year, the club’s committee invites all to come along and enjoy a tremendous afternoon of harness racing action and entertainment.

With the Goulburn Cup surely to provide an exciting contest between some of the best horses in NSW, the entertainment continues off the race track with Goulburn’s own Country Rock music artist Jamie Agius belting out tunes between races.  Children will have much to keep them occupied with the TMNT jumping castle, Capital Region mini trots, face painting, balloon twisting and glitter tattoos.

Entry fee to the course is only $10.00 per adult and every cent of it will be donated to the Goulburn Hospital Urology Department, so, come out for a great day and know your contribution is going to a great cause