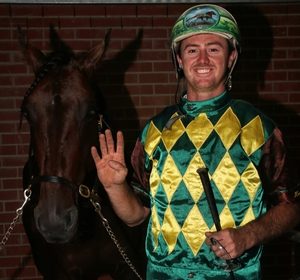 Sunday’s Tom and Angela Hewitt Memorial has drawn together a quality field of pacers, and leading Goulburn horseman Brad Hewitt is looking to diminutive pacer Our Triple Play to give him win number three.

Scheduled as the last of a big eight race card, the $12,740 feature honours the life of Tom and Angela Hewitt who have been synonymous with the light harness sport in the Crookwell and Southern Tablelands region.

The afternoon also doubles as a fundraiser for the Crookwell Community Trust charity, a community organization that would have aligned very closely with the charitable notions of Tom and Angela.

With their contribution to the sport now living on through their sons, daughter, and grandchildren, it’s fitting that Sunday’s race could turn out to be an all Hewitt family finish.

Leading the way is Our Triple Play who contested the famed Inter City Pace series at Maitland in late December, winning both the heat and final; and on each occasion breaking the track record.

In the $30,600 final the 4YO Shadow Play horse was part of a three horse war in which he narrowly defeated Uncle Bernie Hewitt’s drive Royal Story, and the Mark Jones trained Delightful Memphis.

After enduring a troubled start, Our Triple Play moved forward from the 5 gate to sit outside Royal Story who led the field around the tight Maitland circuit.  The pair then settled down to fight out the finish with Our Triple Play nudging out the mare.

As the highest rated starter in the 12 horse field, Our Triple Play will start from gate 12; the outside of the second row.  To add to the difficulty of the assignment, Our Triple Play resumes his battle with Royal Story who has drawn ideally in gate two.

The 4YO Bernie Hewitt trained and driven mare is last season’s Group 1 Breeders Challenge 3YO filly champion and following two starts from a spell will be very hard to beat given her much better barrier draw.

Rounding out the top 3 could be the Scott Hewitt trained Sand Blaster who has drawn well enough in gate 5.  The 5YO Somebeachsomwhere gelding was a winner at Goulburn in November and his two starts since have been sound

Supporting the Hewitt Memorial is the $12,740 TAB.COM.AU Walla Walla Stakes where harness fans will enjoy the clash between the Shane & Lauren Tritton trained Franco Nelson and Brad Hewitt’s Spare Me Days.

The New Zealand star is having his first start for the Tritton stable, but is a recent trial winner at Menangle in fast time.  As the winner of well over $700,000 in stake money, Franco Nelson will appreciate the big drop in class and looks to be one of the better bets of the day.

The hopes of a local win rest with the Brad Hewitt trained Spare Me Days.  Ranking as one of Brad’s favourite horses, Spare Me Days has raced in the fast class since his Hewitt Memorial win in 2016.  A fast finishing 5th in the Shirley Turnbull Memorial at his last start will have the 6YO horse at his top for Sunday’s race, which is named after the immortal pacer who is buried alongside the Goulburn Paceway track.

A host of other races with big fields and classy pacers all adds up to an outstanding afternoon of harness racing.  The Goulburn Club encourages all to make their way to the Goulburn Paceway, and in the process help raise funds for the Crookwell Community Trust charity which will be conducting raffles and seeking donations from the on-course patrons.

Gates to the course will be open from 12 noon and patrons can experience the wonderful facilities of the Grace Millson Centre.  Enjoy quality food and a wide range of cold alcoholic and soft drinks whilst watching all the racing action in air conditioned comfort.