Sunday’s Hewitt Memorial race day was highlighted by some outstanding on-track performance and the setting of new track and race records at the Goulburn Paceway.  On a hot and perfect racing day, horses of all classes performed at their best making the day a great success.

The Tom and Angela Hewitt Memorial was fittingly taken out by the Brad Hewitt trained Spare Me Days.  Named after his grandfather’s favourite saying, Spare Me Days proved far too strong for Sydney visitors Coola Bar Boy and The Boys GNP who started the race favourite.

In an exciting race, Spare Me Days settled towards the rear of the field in the first half before unleashing a sizzling sprint along the back straight which saw him take over the running from the leader and race favourite The Boys GNP.

“I was worried about the John McCarthy horse (The Boys GNP) as they had big wraps about him, but we sprinted so quick; it was a super effort by the horse” said Hewitt

As the field raced past the 300 metre mark The Boys GNP, who had enjoyed a moment of cover since being headed, eased out to challenge just as Coola Bar Boy joined in three wide.  Racing well clear of the remaining horses, the trio of pacers entered the home straight in a line of three.

Coola Bar Boy momentarily looked the winner; however Spare Me Days rallied strongly to kick clear and draw away from his rivals to win with ease.  With the final quarter paced in a slick 27.9, the overall time of 2:43.1 returned a race record mile rate of 1:57.2 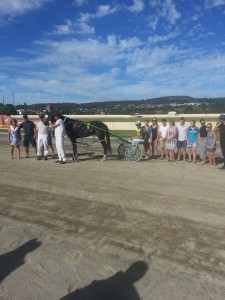 Sharing the moment with a large group of family members Hewitt exclaimed it was his biggest thrill in the sport.  “I have won bigger races but this is my biggest thrill.  I named the horse after granddad, Tolnikie (the dam of Spare Me Days) was one of the last horses he had before passing, and we had everyone here”

Spare Me Days will next race in Saturday night’s Young Cup where he has drawn barrier 2.

The mile rate of 1:56.4 demolished the 1:57.0 time set by another Tritton runner, Salty Robyn who recorded his time during the 2015 Goulburn Carnival of Cups race meeting.

Former Queensland trainer Narissa McMullen, who now has stables at Menangle made a return trip to Goulburn with the well performed Murano for the $13,250 Walla Walla Stakes.  Sent out as the short priced $1.50 favourite, McMullen led for much of the distance and in an exciting finish held off Holm Three and Well To Do Lombo.  The evenness of the field was highlighted by the field crossing the finishing line with just over 7 metres separating first and alst.

The time for the journey was a new track record with the winner returning a mile rate of 2:01.8 for the testing 2760 metre race distance.

Other winners on the day included Might And Main for Bernie Hewitt in the $7,950 Harness Breeders NSW 2YO Princess Series.  The Art Major filly was the subject of a strong betting plunge and didn’t disappoint her supporters.

The $7,950 Harness Breeders NSW 3YO Princess Series was taken out by regular visitor Wayne Dimech and his very well performed Merrywood Ruby.  The three year old filly had come through the NSW Oaks heats and final series and appreciated the drop back in class to score a tough win recording a fast mile rate of 1:56.5.

The Goulburn Harness Racing Club next race on Monday the 14th March, nominations for the meeting close at 9.30 am on Thursday 10th March.