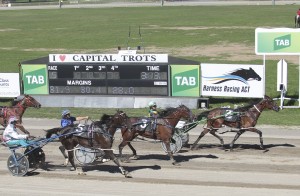 The Brad Hewitt trained and driven Tullow has led throughout to win the 2016 Canberra Cup, making amends for the young trainer’s recent second place finish in the Goulburn Cup.

Contested on Sunday afternoon, the $25,000 feature was raced over the 2570 metre journey, and with the field reduced to seven due to scratchings, including that of pre-post favourite Tact Tate, Tullow went out as the second elect behind Chumlee.

The 4 year old Mach Three gelding was quickly away to take up the running, and with little pressure was able to get away with cheap early quarters leading to a 62.3 first half.  With a lap to run Tullow held the lead from Marion Keisker and Hard To Hear, with the Amanda Turnbull driven Chumlee enjoying the one by one position.

As the field left the winning post with a lap to run Hewitt quickened the speed noticeably with the leader recording a 28 second third quarter, and  as the field headed to the home straight all were under pressure with the exception of the Gunning trained Harlequin Bromac who was held up behind runners.

Turning for home Hewitt kicked clear whilst the Dean Cernovskis trained Harlequin Bromac was forcing his way off the pegs; however it was all too late as Tullow raced to the line to score by nearly 2 metres.  In a final quarter of 28.6 seconds, Harlequin Bromac made up good ground to take second place with Chumlee filling the third spot.

After the race Hewitt was all smiles stating “It worked out good with all the scratchings and he did it easy in front; he was always going to be hard to beat when he led”.

Tullow is owned by a small group of family and friends including Canberra Raiders players Jarrod Croker and Sam Williams.  The cup was Tullow’s second $25,000 feature race win this season having won a Menangle Country Series final in late November.

Earlier in the afternoon the Manny Zolotas owned A Million Starzzz broke through for her first win when she led throughout in the J W O’Sullivan & Son Maiden Pace.  Trained by Dennis Day, the 5 year old mare was well driven by son Todd Day and was never in danger as she raced away to record a 9.7 metre win over Deadsetgiveaway and the Dennis Picker trained Hanbrakerobin.

The racing attention now turns to Menangle with the Miracle Mile carnival under way and the Hewitt family stables have a number of runners engaged this Saturday night.  Leading the way is Sweet Molly Oshea in the Group 3 Therese Cordina Sibelia Stakes.

The mare who has earned more than $160,000 is taking on a hot field of star mares including Frith and Nike Franco.  The Hewitts are also represented in other races by Bon Accord Gal, Freedom Is and the Goulburn Cup place getter Spare Me Days.

On the local scene racing is scheduled next for Monday the 22 February, before the club’s second feature race meeting of year on Sunday 6 March when the Hewitt Memorial race day is conducted.